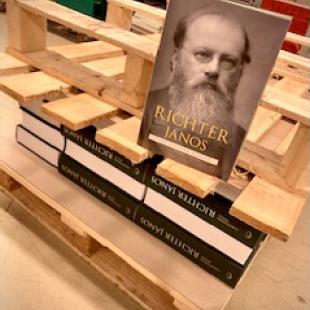 The heritage of meritoriously world-famous conductor János Richter is significant even in today's world of classical music. His name is still well-known everywhere, revered, and ironically esteemed even higher than either in his own birth town of Győr, or his country of Hungary. This is the reason the Győr Philharmonic Orchestra felt obliged to have author Christopher Fifield's 2016 book about János Richter finally published in Hungarian. This important piece of music history will be introduced to the general public at 4pm on November 21, 2021, as part of the 20th Győr Book Saloon, by director of the orchestra Géza Fűke, artistic director Kálmán Berkes, and translator of the book, Boldizsár Fejérvári. Venue of the event is the Kisfaludy Room of the Győr National Theatre. This Sunday afternoon program will also feature a small chamber ensemble formed from the orchestra.

As widely known, Győr-born János Richter still has many ties to our city as more than one building has been named after him here. The maestro's father, Austrian-born Antal Richter, had been a renown musician, church conductor, composer, and founder of the Győr Male Choir. That conglomerate in the early year of 1862 became the Győr Music Association, official fore-runner of the Győr Philharmonic Orchestra.

János Richter gave his first public performance here in Győr also. His entire career was basically spent in four major musical centers of his time : Vienna, London, Bayreuth, and Manchester, but to have close relations to his county of origin played an important role throughout his life. He regarded himself as a Hungarian-born Austrian citizen who proudly represented and cultivated the German line of musical heritage. He invariably inspired composers, vocalists, and instrumentalists of his time, and as a result he premiered a large number of works by Wagner, Brahms, Elgar, Bruckner, and Tschaikowsky. Also, he greatly contributed to the unfolding of the careers of Bartók, Dvořák, Sibelius, and Glazunov. One of his most significant achievements was, however, the elevation of conductors' prestige to a level where they could become self-sufficient, recognized artists thus taking their own marks on music history.

The first edition of Mr. Christopher Fifield's book was published in 1993 already which was then revised in 2016. New chapters like the so-called "Conductor's Notes" were added on. It is this enhanced edition that the Hungarian readers can from now on hold in their hands. The included notes on conducting will no doubt be very interesting for those wanting to find detailed references to the maestro's as many as 4351 public performances during his 47 active years. Based on his own diaries, the book also features some of his correspondences with his contemporary composers and performers.