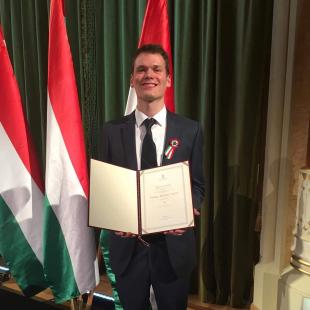 "I am very pleased to have been nominated for this prestigious award by the Győr Philharmonic Orchestra. It is a wonderful feeling to be given this award at my relatively young age. Also, it is truly gratifying that my composing output so far is so appreciated. It is like a jewel of a crown to be working with this orchestra" - said Mr. Balogh.

Máté Balogh was appointed resident composer at the beginning of our current season and is commissioned to write new contemporary music for the orchestra to premier. The first fruit of this fusion has been performed at the season-starting concert last year to be followed on May 22, 2022, in the Károly Flesch Series, by a chamber piece called "8 folk songs" to be performed by singer Veronika Harcsa and artists of the Győr Phil. Last but not least, his work, simply called "Symphony", is to receive its debut performance on June 2, 2022, in the Chamber Music Series. It is essentially an hommage to Joseph Haydn, conducted, like all his other pieces, by resident conductor Martin Rajna.

All members of GYPO send their heartfelt congratulations to Máté Balogh!