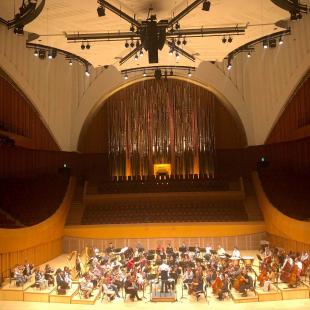 One of the highest points of the Győr ensamble's Eastern Asian tour was the Tuesday concert in the grand Lotte Hall in Seoul, South Korea. The introduction of our orchestra has been a celebration of the two countries' 30 year anniversary of diplomatic ties as well as a salute to Hungary's 1956 revolution and freedom fights. Our state was represented Zsolt Németh, president of the Hungarian Foreign Affairs Committee. Our performance at the same time was the opening event of 11th Seoul International Festival. The program included the Les Préludes by Franz Liszt, and Béla Bartók's Concerto for Orchestra. The concert has been recorded by KBS, the biggest South Korean television channel, and was to be aired the following month.

"It is tremendous honor to perform here as the Lotte Hall in Seoul is ranked among the finest concert halls in the world" - said deputy manager Gábor Ősz when we had talked to him before the concert. "The most highly esteemed soloists, ensambles come here regularily, and the accoustic engineer of the hall is Yasuhisa Toyota whom we had last met at the first stop of our tour, in Fukuyama."

GYPO's South Korean debut concert on Tuesday is followed the day after by a flight to the last stop of the tour in Tokio, Japan. "A heavy-going tour like this can only be successful if every one of us is disciplined, and adapts well to the inevitable daily challanges coming our way. I am proud to say we are standing our ground firmly so far. No doubt that the absence from our families is the hardest part during the three-week long tour but we seem to cope with that just fine too" - reassured us Gábor Ősz.

Between the total of ten performances members of GYPO tried to take advantage of the little leisure time they had. On the Japanese island of Okinawa, for example, our members had the chance to find out quite a bit about the life of the locals. It is documented that more people reach the age of 100 here than anywhere else in the world. When asked about possible reasons we hear that their diet and calm lifestyle could be the answer. "Okinawa offers a unique way of living in that they produce most of their food themselves and even have their own brew of beer"- reveals his observations Gábor Ősz again with a wide smile. "We sure had some fun there as we had one full day to see some sights. Some of us went to scuba dive even."

After all that fun our musicians arrived in the land of the rising sun, Japan, full of colorful new experiences. The orchestra, last having been here in Tokio in 2016, gives its final concert of the tour. Both the Seoul and the Tokio concert was partially sponsored by Hungary's Foreign Ministry.