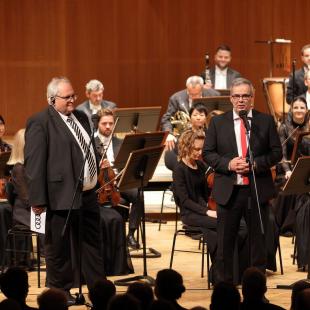 Two musical masterpieces had been prepared for the International Day of Music celebratory concert on Thursday, October 29, 2022. In front of a packed Richter Hall GYPO's resident conductor Martin Rajna conducted Mozart's Symphony no. 40 in G minor, the "Great", and the 8th Symphony by Antonin Dvořák. As an "upbeat" to the concert the audience was greeted by the orchestra’s director, Géza Fűke, as well as by Győr-based Audi Hungaria's board director, Alfons Dintner. As reported earlier the premium category giant company, Audi Hungaria, had officially extended its already 7 year old sponsorship of the Győr Philharmonic Orchestra by another 3 years.

"Like at Audi Hungaria, it is also our creed to not compromise on the upkeep of the highest standards. We attribute our successes to that which would neither be possible without the faithful love of our patrons nor without the generous sponsorship of the Audi Hungaria. This partnership is increasingly significant now when we are all facing some very real and global existential challenges. It is my conviction that financing cultural formations like ours will hardly be feasible without the help of great companies like Audi Motors. Having them as one of our main sponsors for another three years places our cooperation to a new level, and we are very thankful for that" - said Mr. Fűke in his pre-concert speech.

In turn, the board director of Audi, confessed classical music lover, Alfons Dintner, first praised the evening's two genius composers, W. A. Mozart, and Antonin Dvořák, for both of them being representatives of immense beauty and artistic engineering especially when their music is performed by musicians like the members of the Győr Philharmonic Orchestra. "We also want to thank you for this very inspiring partnership that is to be continued in the next 3 years. We at Audi are more than pleased to make a contribution to hearing and enjoying masterpieces like the ones tonight live for a long time coming" - said Mr. Dintner.

As a "finale" of their stage speeches Mr. Fűke handed over the fitting gift of a baton in a lovely box to Mr. Dintner. The small gesture had indeed been well thought out as in order to put òut top performances both Audi Hungaria and the Győr Phil need to be "conducted" from masterly constructed scores. It is crucial in these hard times that the Audi Hungaria's number one man leads the company and its several thousand employees with great expertise.