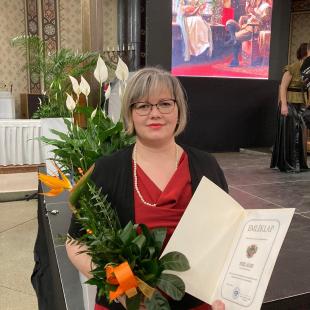 Ever since 1989 the Day of Hungarian Culture is celebrated every year on January 22. That date (January 22, 1823) featured on the manuscript of a poem called "anthem" by Ferenc Kölcsey that later became the lyrics of the Hungarian national anthem, composed by Ferenc Erkel. Traditionally, that is when the city council of Győr hands out the "Győr Art" and the "Győr Culture Awards".

It is our great pride and pleasure to announce that this year one of our staff members, Agnes Nyeki, was one the recipients of the Győr Culture Award. As head of the Győr Philharmonic Orchestra's secretariat, Miss Nyeki received this award as recognition of her contribution to our city's cultural life.

Komárom-born Agnes Nyeki has obtained her diploma from the István Széchenyi University's International Relations faculty. She became assistant secretary of GYPO in 2008 under the present leadership. By now she has grown to be a key member of the company being responsible for concert organizing, contacting, scheduling, soloist booking (speaking in German too), and away-concert coordination. Her proverbial patience and kind smile are a real blessing on such hectic days especially. One great example for that is January 22,  2022, when the orchestra performed in the morning at the inauguration ceremony of the House of Hungarian Music as well as in the afternoon at the Palace of Arts as part of the Richard Strauss marathon concert series.

"It usually takes weeks, even months to make a live concert happen but it is rather pleasurable to follow through with the process until the end when the concert actually takes place. That is when I feel that all the efforts paid off indeed."

As a "side effect" of her job Miss Nyéki had grown to like classical music more than ever. Her taste in music bends toward the romantic composers like Brahms, Richard Strauss, Dvořák, or Beethoven's late period. It comes as no surprise that she picks, as her favorite concert series, the 2009 GYPO tour conducted by the magnificent late Ennio Morricone. Also, she finds the late-winter Carnival concert series very entertaining. As for her most memorable stage-version opera presentation she chooses Puccini's Tosca having starred soprano Gyöngyi Lukács back in 2012 when the audience celebrated her moving performance for about twenty minutes.

Miss Nyéki feels particularly happy and proud when the Győr Phil travels to play in one of the true shrines of music making in the world, the Musikverein Saal (hall) in Vienna. Most people only get to see that stunning venue on television while watching the New Year concert on January 1 every year. Agnes considers it one of the best perks of her job when she gets to sit in a chair in that building every now and then.

Heartfelt congrats from every member of the Győr Philharmonic Orchestra to Agnes Nyeki!