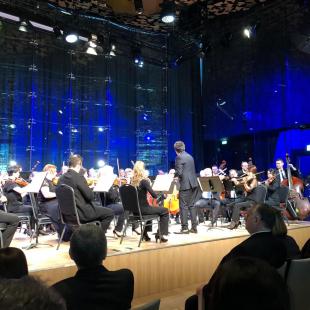 The Hungarian House of Music was opened on January 22, 2022, by a posh inauguration ceremony in City Park, Budapest. As Hungary's prime minister Viktor Orban said in his speech : "we Hungarians still manage to expand even amidst the current crisis that surrounds us." Andras Batta, managing director of the new institute added : "our mission is to invite representatives of the most diverse kinds of music imaginable. Thus this house is not simply just another place to play music in but also a genuine music pavilion that continues the best City Park traditions." True to that intent the performers of this notable event lined up a wide spectrum of musicians by featuring soprano Erika Miklosa, classical and jazz pianists Gergely Boganyi, and Bela Szakcsi Lakatos, as well as the Győr Philharmonic Orchestra, conducted by Martin Rajna.

"It is a great honor to be invited to this opening ceremony" - started GYPO director Géza Fűke. "The Győr Philharmonic Orchestra had been asked to perform the fourth movement of Ludwig van Beethoven's Symphony number 5 right after prime minister Viktor Orban's speech. That means our musicians are making history here by playing the first notes of symphonic music in this beautiful new building that incidentally looks just like on the photos I have seen of it in Győr. It certainly fits perfectly in the City Park environment" - continued Mr. Fűke. "Unfortunately, we have very limited time to take a good look around here as we need to get back on the bus and go over to the Palace of Arts to participate in the Richard Strauss marathon concert at 4pm by playing his symphonic poem Don Quixote" - explained the director.

The Hungarian House of Music has been built on the site of the former Hungexpo office buildings in a newly recultivated an area of about 7000 square meters. The extravagant, modern building had been designed by Sou Fujimoto of Japan, regarded one of the most innovative designers of our time. The final result indeed makes the impression of something ethereal, open, harmonious, and transparent (thanks mainly to the dominating glass panels). The building is full of interactive playing possibilities that all have to do with music one way or another. It is not by chance that, because of its innovations, this creation had unofficially been one of the most anticipated buildings internationally also.

All in all, the Hungarian House of Music has opened its doors for the music-loving public where everyone can find something music-related of their liking, be it an exhibition, an interactive game, or a live performance. In this sanctuary of music people can also peep into the rehearsing process of the various group formations by watching the live stream in the Dome of Sounds as well as previously recorded video footages like a movement from one of Bela Bartók's most popular pieces called "An evening in the village" recorded by GYPO last September and showed here on day 1 in the House.