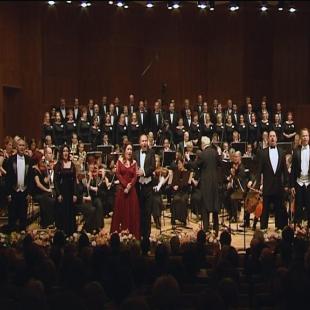 In my youth Verdi’s Il trovatore, starring the unforgettable likes of György Melis, Déry, József Simándy, Komlóssy, used to be one of the most attractive productions of the Hungarian State Opera House in Budapest.

Even in the ’80s, with a cast of Miller, Tokody, Misura, Ilosfalvy, B. Nagy, it was too a must to go to. This time, however, I was slightly hesitant to leave for Győr to see the opera as it had been as far back as in the year 2000 when I’d seen an overall satisfactory rendition of the work at the Verdi Festival in Budapest. Something has since tainted the experience every time I went to see the opera. One time a sudden replacement in the cast due to cancellation, another time an awful Greek guest tenor who managed to ruin the entire show… Long story short, I was more than eager to at last see the stage version of the piece in Győr with a rather promising cast, and to my great pleasure this time absolutely nothing had come between me and the thorough enjoyment of this masterpiece.

The stage version allowed to fully relish on the purely musical aspect of the work without the  usual visual distractions of customes and decorations. There was none of any blind staggering, army of dog-headed soldiers, ugly old hag in the prison with a big sagged bottom, to name a few of the rather absurd ideas of the Munich interpretation of late I’ve seen. There was music and singing. Need anything more? Maybe someone else does but not me, thanks. The opera as a genre is that and that only for me : the art and pleasure of the sound. This evening was a reinforcement of the conviction for me that operas can be interpreted differently, updated, modernized, twisted and turned, but to present them without the right kind of sound is pointless.

If there is one opera that becomes completely senseless without good singers, it is the Il trovatore. It is not worth to even think of dusting off the score unless there are four good if not outstanding singers for the equally demanding title roles at disposal. It is hardly by chance that the Il trovatore is seldom scheduled for play at the world’s major operas (e.g. in Vienna it hasn’t been performed for ten years) and even when it is performed, the choices of singers for the roles are rather limited. It is so in particular in the case of Manrico but good Count Lunas and Azucenas are hard to find too.
Taking the above-mentioned concerns in consideration we can not thank enough to the Győr Philharmonic for finding a more than adaquate replacement for the tenor role on real short notice.
Due to cancellation the originally scheduled Argentine Dario Volonté has been replaced by Walter Fraccaro which has turned out to be a lucky twist of fate. Although not yet a celebrated-to-death singer, Walter Fraccaro had been a guest singer at the most famous operas of the world in the past 20 years. He was a student of Bergonzi, a favorite of Maazel, Santi, or Bartoletti, who has slowly but surely built up his career to get to top roles like Otello.

He sings with that trademark traditional Italian technique that was so characteristic of his great predecessors. His voice may not be of especially beautiful timbre but valiantly tackles all the difficulties of the role. He sings in great lines and never allows falsetto to overdo emotional endevours. His phrasing is invariably accurate and unfailingly retains that inimitable Italian bel canto throughout the piece. When there is a classy singer like him at disposal it goes without saying that there is no need to transpose his grand aria with those notorius high ’C’s which he belted out  amazingly. Neither was there any trouble with the f minor Romance  that also went flawlessly. His Manrico was without any hitches from the first note to tha last. A kind of performance on which any opera company could certainly build their repertoire. It would definitely be a good idea for our very own state opera to count him in when it comes to casting… It is not hard to imagine him pulling off great performances in e.g. Aida, Otello, and those other classics. Well, let us dream on…

I heard Bernadett Wiedemann first almost 25 years ago in the role of Alisa in Donizetti’s Lucia de Lammermore. I remember being impressed with her voice despite of the character’s short input. Her voice no doubt had gone through some changes since but the greatly feared „mezzo malady” (that negatively affects the mid-range) had by no means cought up with her. Her voice may have become a bit less dense and colorful, a little sharp and bright at times, but still a real grand opera voice that never fails to deeply touch the listener. She sang an excellent Azucena that truly held the audience spell-bound until the end. In terms of dramatic hights her most memorable moment this evening was her two-minute duet with Agache. We can certainly be very proud of our lovely Bernadett.

Gyöngyi Lukács made her first impression on me in 1988 when I heard her in the role of Leonora which was followed by innumerable other occasions up to the late ’90s. Who would ever have guessed that she had not sung in Il trovatore for 15 years? Naturally, her voice had also gone through some changes over the decades. She obviously no more has those girlish qualities she used to after all the heavily dramatic roles like Abigaille, Lady Macbeth behind her. Her mid-register for me is better than ever though, full of smooth, velvety, charmingly faminine qualities. Her high notes were trouble-free unlike the last time I’d heard her back in the spring when she appeared in Turandot struggling with an illness. Perhaps in the agilitá sections her voice is not as resilient as it used to be but it is apparent that Mrs. Lukács knows no compromises when it comes to accurate score-reading. She works hard for each note she sings. When Verdi writes staccato that is exactly what she does even though it would be more comfortable to slur the notes. She reached her pinnacle this evening for me in the quartet of the Finale in which she sang along with her partners and her contribution added a great deal to the beauty of the aria that even brought tears in my eyes. It would be wonderful to see her in this and her old roles again in the Budapest opera house.

Alexandru Agache  as count Luna. I’ve been through that times and times again that it is not easy to find words to describe Mr. Agache’s vocal attributes but I am now making yet another attempt. Reason being just for another attempt is that what I had actually heard is for me beyond description. (Chances are that I had already put down this very sentence after one his performances in Macbeth). In the past 43 years I believe I have heard each and every Count Luna on Hungarian stages as well as some abroad. Having heard the role by Mr. Melis, Cappuccilli, Bruson, Nicci, Manuguerra, Harlea, or Iordachescu, with all due respect and admiration for them all I have to say Agache’s baritone is absolutely superior.
Agache’s voice is like a granite column built on the fundaments of air support. In spite of all its density and power it is perfectly capable of differentiating between extreme mood changes without losing the sturdiness of Verdi’s typical heroic baritones. I dare say knowing his many appearances that Count Luna is his very best character bearing the marks of a number of great conductors and directors, and is miticulously worked out down to the finest details. It would be a worthwhile effort to analyse his every minute from the raging lover scene of the first act to his total collapse in the fourth. His Count Luna is undoubtadly one of the greatest opera experiences in my 43 year-long record of visiting houses of opera. I cannot wait to see him again somewhere. What else could I wish my fellow opera fans in Budapest but to see him there too again as soon as possible.

Apart from the four brilliant title singers the rest of the cast did their very best also. András Palerdi in the technically challenging role of Ferrando was to me more convincing than ever before although this role does not require the singer to show off his higher registers. Sahakyan Lusine in the small but rewarding role of Inez proved again that after her performance in the Aida as High Priestess in the summer this year in Szombathely that she is much more than just a promise. The Hungarian State Opera Choir is an act of its own as they seem to possess a wondrous gift to radiate light and power upon those present under the same roof. They certainly are experts on how to sing Italian opera choruses effectively.

Being aware of the orchestra’s general repertoire it would be reasonable that they are less at home in this musical genre yet it is not evident while listening to them. They appear to accompany the singers with incredible ease and sensitivity. Also, they are more than able to respond to every movement the conductor makes. This event was a debut performance for the conductor, János Kovács, who in my recollection had never been part of an Il trovatore production before. Not in the capital where he is based anyways. Considering that, he led the entire cast with impressive security and knowledge. Gentle lyrical passages were equally suitably handled than the sweepingly explosive ones.

I have been to quite a few opera undertakings in Győr by now. I have been to gala concerts, Tosca, Rigoletto, Norma. I have one major problem with all of them : they were all one-off events in the season. I wish there would be at least one more. There could be as many as can be. My presence there is a safe bet.

Photos from the television record: 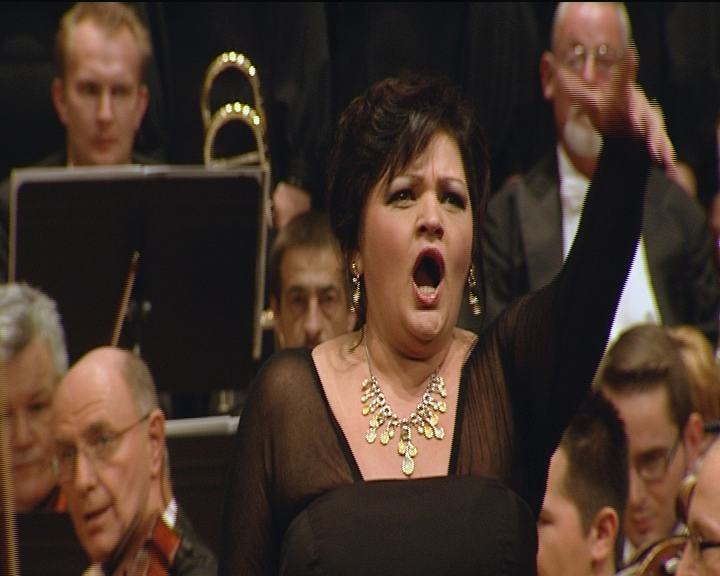 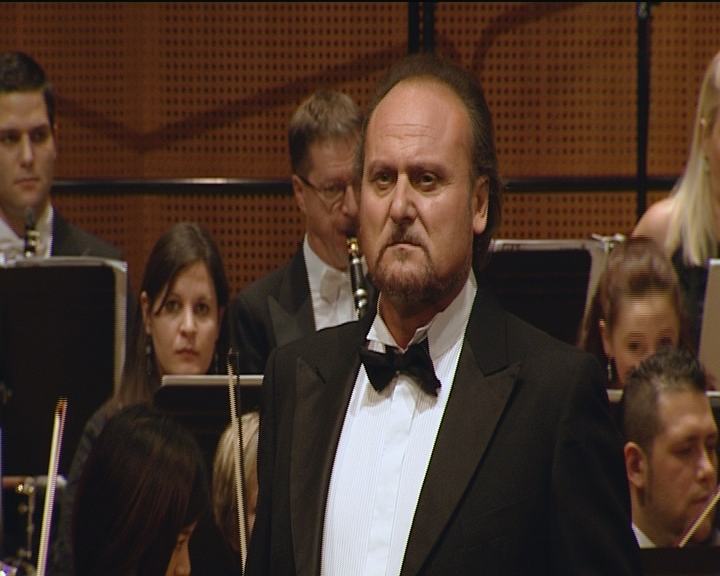 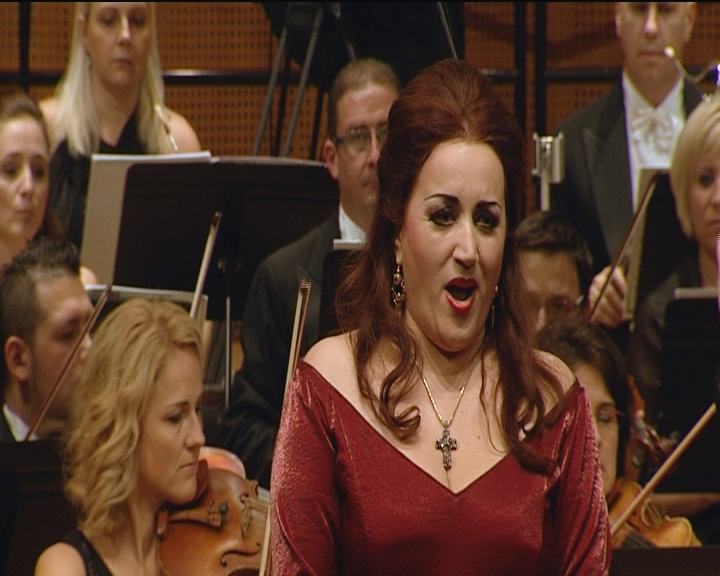 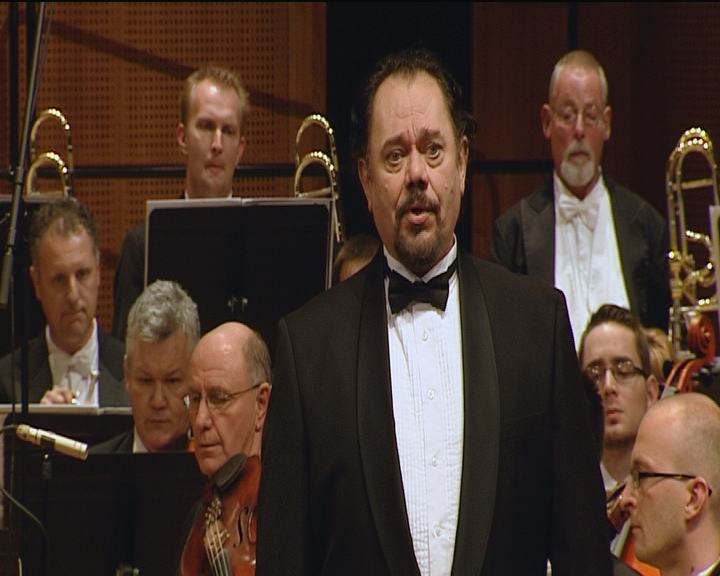