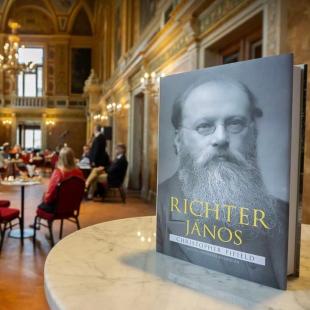 A music historical gap was filled by Christopher Fifield's recently published autobiographical book about the life of world-famous Hungarian conductor, János Richter. This significant publication that had incidentally been encouraged and aided by the Győr Phil disects and analyzes the personality of a man who had such a great impact and inspiring presence on composers, singers, and instrumentalists of his time. János Richter was the conductor when Richard Wagner's legendary "Niebelung Ring" was premiered in Bayreuth, Germany. Furthermore, he made tremendous efforts to perform the works of Brahms, Elgar, Tschaikowsky, Stanford, Bruckner, and Parry, also paved the way for the musical career of Sibelius, Bartók, and Glazunov. The voluminous book contains even Richter's so-called "Conducting Notes" that follow him through the most significant periods of the maestro's eventful life. The book was first introduced to the wider public by Bartók radio station host / music historian Ádám Bősze at the newly renovated Hungarian Opera House in Budapest, Hungary.

"The deservedly world-famous conductor's heritage is indeed making a mark on even today's classical music life as his name still rings well and is highly regarded internationally in particular. That is why they Győr Philharmonic Orchestra had felt obliged to facilitate the Hungarian version of the book" - made his point the orchestra’s general director, Géza Fűke. Also, along these lines a plan exists to erect a statue of János Richter somewhere central in Győr as well as to have his well-documented correspondence with his contemporary composers, friends, translated and published in Hungarian. In the light of the approaching Bruckner anniversary the orchestra plans to make recordings to continue the great predecessor's pro-Bruckner endeavors.

The conductor's father was Austrian-born Antal Richter who himself was a well-known musician of his time, a choir master and composer in the service of the Esterházy family who had also founded the Győr Male Singing Club that in fact directly preceeded the foundation of the Győr Philharmonic Orchestra. The latter has become a municipal semi-professional orchestra in 1894 all the way until 1968 when the company could finally be upgraded to a fully-fledged professional concert orchestra. Notably, there were some debut performances here in Győr conducted by Antal Richter for the first time, like Joseph Haydn's piece called "Seasons" as well as W. A. Mozart's comedy opera "Cosi fan Tutte". The young János Richter's first public appearance as a conductor also took place in Győr on September 19, 1865, in association with the Singers' and Music Club of the city. The main places of his spectacular career were four of Europe's greatest classical music metropolises, namely Vienna, London, Bayreuth, and Manchester.

"In the fifth chapter of this awe-inspiring book we can read about János Richter's years spent in Budapest. The maestro who enjoyed a close relationship with composers Richard Wagner and Ferenc Liszt was the resident conductor of the Pest National Theatre as well as of the Philharmonic Society's Orchestra between 1872 and 1875" - said chief director of the Hungarian State Opera, Szilveszter Ókovács. "During those years maestro Richter conducted a great number of operas here both by Hungarian and foreign composers sung in our home language. It was him who premiered the Christ Oratorio by Ferenc Liszt in 1873 commemorating the 50th anniversary of the legendary composer's career".

"Mr. Richter's influence on the city of Győr is still tangible"- says deputy mayor Elza Perger. "A plaque can be seen on the front wall of the house in Apáca Street where Mr. Richter was born. Also, our music conservatory, GYPO's concert hall, and the local music archive were all named after him. Besides the existence of Richter Hall the Győr Phil tirelessly keeps the Richter- cult alive by having one of its season ticket series named after him".

"Christopher Fifield's 1993 monography on which the present Hungarian publication is based contains János Richter's conducting notes as well. Exact quotes of the maestro's comments made on his over 4000 public performances follow through his incomparable career spanning 47 years" - explains the translator of the book, Mr. Boldizsár Fejérvári.