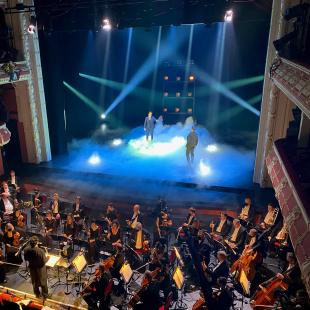 Prime Hungarian television station Danube TV (Duna TV) checks in from a new location this year to broadcast a spectacular New Year's Eve musical gala show at the recently renovated and revamped Gergely Csíky Theater of Kaposvár, Hungary, featuring the Győr Philharmonic Orchestra, as well as the country's celebrated stars of the opera/operetta genre. Conductor of the large-scale production is István Silló, music director of the Győr National Theater.

"Our city of Győr represents itself strongly in this presentation" - summarizes Gábor Ősz, deputy manager of GYPO, who this time is also an active participant as a bassoonist. "This is just one of those bids we had accepted that is much envied by other Hungarian symphony orchestras as any of them would have eagerly said yes to it. It is a great feedback and recognition of our general output and standards to be invited to take part in this prestigious event. The creators of this show were rather complimentary at the end of this arduous two-day-long session. At the risk of being biased I can honestly tell we have met all expectations professionally as in all other respects" - says Mr. Ősz proudly.
Due to the international pandemic situation this was the last appearance of GYPO in 2020. Following an almost 4 hour busride, members of the orchestra have begun rehearsing the thirty numbers that were to be recorded altogether. This strenuous work continued the day after with the lengthy recording process well into the late evening hours of the second day.

"GYPO musicians have put in examplory efforts during these two taxing and exhausting days. It is of paramount importance that a company's management work with employees who are able to maintain a relatively stress-free, positive, problem-solving attitude, and conduct for hours on end in tackling challanges like this show. It appeared to have been the general impression we have made there which, coupled with genuinely professional work ethics, I believe is one of the biggest virtues of our Győr ensamble. We, leaders, do highly appreciate that as we think it could be a decisive factor in winning projects like this one" - concludes Mr. Gábor Ősz.
No less than 270 crew members were involved in the making of this special gala performance in Kaposvár. It had demanded a great deal of preparations in terms of collecting all the fresh Covid-test results, measuring body temperatures, and making sure of mask-wearing of every single participants who'd stepped in the theater. GYPO members were provided a rather trendy-looking black mask displaying the orchestra's new logo.
"The joint efforts of all crew members have released a kind of energy tv-viewers would certainly score for" - said Gábor Ősz, emphatically complimenting on the hard work of chief-director, Csaba Sófalvi, artistic director of the Gergely Csíky Theater of Kaposvár, Tamás Olt, and that of Tamás Bori.
"We are in constant touch with our patrons/audiences, and I rest assured that those liking and following us will sit down in front of their television sets to watch this gala so full of delightful moments" - said the deputy manager on the last note (pun intended!)
The gala performance features company members of the Gergely Csíky Theater of Kaposvár, and the Somogy Dance Ensamble. The Győr Philharmonic Orchestra had the pleasure to work together again with vocalists Mónika Fischl, Marika Oszvald, Erika Miklósa, Attila Dolhai, Andrea Szulák, Levente Molnár, and Gábor Bakos-Kiss. Since almost all of them had already had some or other affiliation with our orchestra in the past it did feel like greeting them in Kaposvár as long-time friends.