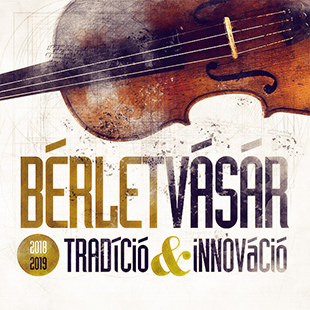 Tradition and innovation are the two staple notions clearly permeating the Győr Phil's new orchestra season that also serves as a motto in anticipation of the year-long celebration of the 125th anniversary of founding a symphony orchestra in Győr as well as the 50th of taking the conglomerate to a full-time, professional level. The emphasis is on holding on to traditional values of classical music while approaching it in innovative manners in terms of interpretation.The harmony of this duality provides the chief guiding point for GYPO's artistic activities. As our patrons may well have been expecting in our seasons of yesteryears, exceptionally gifted stars of international fame, returning guest artists, and great novelties all feature in our beloved orchestra's current program offerings.

Just to let you see what we mean, our prospective music making partners in the Artur Nikisch season ticket series are scheduled to be the winner of the 2015 International Tschaikowsky Piano Competition, Dmitry Masleev, world-renown violin virtuoso, Sarah Chang, the Budapest Festival Orchestra conducted by Gábor Takács-Nagy (featuring József Bazsinka on tuba), celebrated pianist siblings, Mari and Momo Kodama of Japan, and last but not least the children of Tamás Koncz, GYPO's former conductor, violinist of the Berlin Philharmonic Orchestra, Christoph, and cellist of the Berlin Phil, Stephan Koncz respectively.

The opening event of the János Sándor series is a special treat: world-famous violinist Sarah Chang, partnering up with GYPO at the Liszt Academy, Budapest, conducted by Kálmán Berkes. Gilbert Varga, son of internationally acclaimed violinist Tibor Varga is back to Richter Hall to conduct our orchestra at the second concert, featuring clarinetist of the Munich Philharmonic Orchestra, László Kuti. To finish off the series, GYPO is to be conducted by Alexei Kornienko, featuring as soloist his wife, Elena Denisova.

Our Benedek Istvánffy series offers on the Day of the Dead (November 1) religious works by the great W. A. Mozart, his moving Requiem being the center piece of the evening. The concert features well-known foreign singers, as well as the Chamber/Youth choirs of the Dome of Salzburg, Austria, conducted by Choir Master, János Cziffra. The second item of this series promises to be a real musical feast alternating the classical material with pop melodies. To cunjure up the spirit of Christmas we’ll have well-liked Hungarian singers Kati Wolf and Tamás Vastag onstage singing over orchestra accompaniment, conducted by Márton Rácz. The next concert on the list in this series is likely to be one of the most memorable ones of the season. Apart from the excellent vocalists we’ll have the priviledge to hear the Grammy Award winning Viennese Arnold Schoenberg Choir on one stage with GYPO in the Basilica of Győr. The unique evening’s conductor is choir master Erwin Ortner, a Grammy Award holder himself. Finishing the series is a presentation of the works of Haydn and Brahms, conducted by Alpaslan Ertüngealp, featuring organist Gergely Rákász.

The 17:18 Series has some rather engaging programs in store for those preferring to come to Richter Hall earlier in the evening. Those who have already been to a concert like that can attest that besides hearing great music in a laid-back atmosphere, audience members also get some insightful music historical facts from historian Balázs Szabó. These 60 minute long events are incidentally a somewhat abridged versions of the orchestra’s normal two-part concerts of the season. The first three of them are conducted by Kálmán Berkes while the last show is by Azis Sadikovic. Works include pieces by Tschaikowsky, Kodály, Mozart, and Debussy. Families arriving with small children may take advantage of our playing room on the second floor of Richter Hall supervised by trained personnel.

The novelty part referred to earlier is the introduction of the Győr Chamber Orchestra formed by members of the symphony orchestra. A Chamber Music Series is launched in the 2018/19 season giving concerts at the Old Evangelical Church in Győr. Soloists are selected from the group itself while the artistic directorial role is to be shared by Kálmán Berkes, Tibor Bényi, and János Rolla.
Nedless to say that GYPO hits the road again this season doing its regional concerts in the cities of Tatabánya, Sopron, Veszprém, Mosonmagyaróvár, and Budapest.

Yet another motto at the end: Let’s do great service by entertaining!